When you’ve been writing about books all year, it’s an easy thing to do. When you haven’t been keeping detailed notes on your own reading, it’s a little harder. My review output has slowed in the last few years, so list-making is more of a challenge, but this year I decided to try to sum up 2019’s books anyway.

This year’s reading was Anglo- and Euro-centric: I read Jean Rhys and Sam Selvon for the first time, worked through Edward St. Aubyn’s Patrick Melrose series, and picked up new fiction from Guy Gunaratne and John Lanchester. The basic idea was to get to know my new country of residence a little better through some of its writers. (Did it work? Maybe. To better understand this country I should probably just watch more television.)

Anyway: Here’s my stab at this year’s best-of list, featuring, in no particular order, my ten favorite books published in 2019. 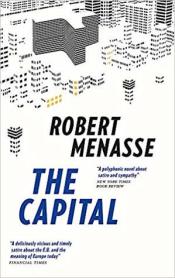 The Capital by Robert Menasse, translated by Jamie Bulloch

About a decade ago, Robert Menasse had a thought: “It’s a scandal that I know far too little about how the EU functions, and why it doesn’t function, when it’s the most important topic of my lifetime.” To remedy this, Menasse moved to Brussels, immersing himself in the bureaucratic grind of the European Union. The resulting novel is an acerbic office satire, replete with roller suitcases, failed workplace affairs, and aimless ambition.  But it’s more than that: The Capital also offers a powerful moral defense of the EU. If a thoroughly entertaining and frighteningly perceptive look at the failures of European politics is what you’re after, this is your book.

Girl, Woman, Other by Bernardine Evaristo

You may have heard about the controversy over the Booker judges’ decision to award this year’s prize to both Girl, Woman, Other and Margaret Atwood’s Testaments this year. In all likelihood that was all you heard about this book—which is a shame. I wish more had been  written and said about the book itself and its contribution to a long-running literary conversation about race in England. Girl, Woman, Other is a lovely, life-affirming novel, a celebration of contemporary black British female experience told through the eyes of a dozen characters from all walks of life—playwrights to house cleaners, teachers to investment bankers. I found its cheerful fearlessness completely refreshing. 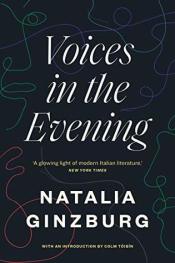 Voices in the Evening by Natalia Ginzburg, translated by D.M. Low

It took me several attempts to get past the first few pages of this newly issued translation of Ginzberg’s 1961 novel, which begins with the young narrator, Elsa taking a walk with her mother through their Italian village. Her mother does all the talking; in the entire first chapter, Elsa speaks barely a few sentences. “Couldn’t we sometimes have the miracle of a word from you?” her mother asks. The imbalance of the exchange is the point: Ginzburg’s narrator is always off to the side, observing. What does fascism to do ordinary people—to their family histories, to the fabric of their small towns, to their understanding of their own place in the world? This is the question that Ginzburg tries to whittle away at through her account of Elsa’s family. In his introduction to this new edition, Colm Tóibín describes the book as a sepia photograph, which is accurate, but which also suggests a certain sentimentality. This sells the book short. Voices in the Evening is as elegantly melancholic as it is darkly instructive.

The Topeka School by Ben Lerner

The career of Ben Lerner’s mother, feminist psychotherapist Harriet Lerner, looms large in this novel. The fictionalized Harriet is a therapist and best-selling author Jane Gordon—a woman whose work has made her the subject of a campaign of hate from abusers Lerner simply calls “the Men.” Will Jane’s son Adam grow up to be one of them? Adam is a strident but sensitive nerd, a weight-lifting poet and Kansas debate champion. Sometimes he does his mother proud. Sometimes, she’s not sure if she can save him. This is a book about masculinity—its fragile side, its toxic side, its vulnerable side. But what I enjoyed most were Lerner’s ruminations on the 90s. His depiction of competitive extemporaneous speaking tournaments is spot-on (as a former high school extemper, I smiled and cringed!), as is his portrait of white suburban middle-class high school life of that era. But his sketch of a creepy young Kris Kobach-like character—Adam’s speech coach—stayed with me most of all.

My Sister, the Serial Killer by Oyinkan Braithwaite

Korede knows the drill all too well: Another frantic phone call from her little sister, another heavy dead body, another cover-up for her to be complicit in. Seductive Ayoola attracts all the men—and then she stabs them with her father’s ornate nine-inch curved-blade knife. But when her sister goes after Korede’s handsome, gentle colleague, Tade, something shifts. Simple and sharp, pulpy and fast-paced, this book from 31-year-old Nigerian-British rising star Oyinkan Braithwaite is all murder and little mystery. Its charm lies in the girlish directness of Braithwaite’s narrator Korede, and its messy sisterly amorality.

Say Nothing: A True Story of Murder and Memory in Northern Ireland by Patrick Radden Keefe

This brilliantly-researched history of the Troubles centers around the death of 38-year-old Jean McConville, a Protestant-born Catholic-converted widowed mother of ten who was marched out of her home by masked men one night in 1972 while her children watched in horror. She was never seen again. Keefe is a gifted storyteller—and, as it turns out, a capable detective, too. Mining the controversial Belfast Project interviews at Burns Library in Boston College, he slowly pieces together the shadowy events surrounding McConville’s disappearance. He also lays out a complicated but compelling portrait of  IRA firebrand Delours Price. These two women couldn’t be more different from one another, and their stories couldn’t be more painfully intertwined. 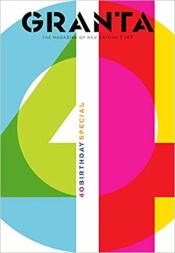 I bought this on a whim—the sight of its cover made me nostalgic for the summer I spent lurking in the shelves of Granta’s back-catalog in London as a college intern at the magazine. But picking it up was a fine idea: Every single story in here is very, very good—a profound reminder of just how much world-class talent Granta has published in the last four decades. Kazuo Ishiburo tells the tender story of a Japanese boy and his aging grandfather in “The Summer After the War”; Amitav Ghosh arrives at a surprising consideration of colonialism in “The Imam and the Indian”; Philip Roth pays wistful tribute his father in “His Roth.” But my favorite might be “The Snow in Ghana,” in which Polish writer Ryszard Kapuściński considers the futility of trying to make one’s experience known: “Something, the most important, the most significant thing, will remain unsaid.”

The Anarchy: The Relentless Rise of the East India Company by William Dalrymple

How did corporations become all-powerful, and will their unchecked dominance be the ruin of us all? This comprehensive investigation into the rise of the East India Company heads back to 1599 to try to answer that question, as well as a few others about state-sanctioned greed, political violence, and the underpinnings of the British Raj. After outlining the conditions that made the birth of the East India Company possible in the first place, Dalrymple moves region by region, trade agreement by trade agreement (and then, battle by battle) charting how—one nawab after another—the Indian sub-continent fell under its sway. It’s a fascinating study in the many ways in which power can be abused. Every historian of India has his or her biases and the second time I saw the word “effete” used to describe a Mughal Prince I had to roll my eyes. But to his credit, Dalrymple is unsparing of British elite too: One military commander’s son is described simply as “the notably unintelligent Governor Madras.”

The third installment in Ali Smith’s quartet of seasonal novels reads like a lucid dream. The plot circles around the adventures of Brit, a young employee of an Immigration Removal Center, and a mysterious little girl named Florence who takes Brit on a journey of discovery. As in the other books in this series, Spring fuses its powerful political indignation with a blurry magical realism. The result is a reading experience nearly as disorienting as the times we live in.

Heroic Failure: Brexit and the Politics of Pain  by Fintan O’Toole

There is a long tradition of heroic failure in English history: The Charge of the Light Brigade is just one of the many examples Fintan O’Toole cites in this sharp critique. “Someone had blundered,” obviously, as the Tennyson poem notes— but that’s not the point, is it? O’Toole is an astute political observer of British politics; his political and psychological analysis of the Brexit mess is essential reading. He’s also very funny, and not afraid to push a riff a little too far (I’m thinking here of the extended bit on Fifty Shades of Gray). This was technically published in late November of 2018, but it’s too good to overlook, and just as relevant a year later.

Honorable mentions: She Said: Breaking the Sexual Harassment Story that Helped Ignite a Movement by Jodi Kantor and Megan Twohey;  The Way We Eat Now by Bee Wilson

The book I’m most annoyed I didn’t get around to yet: The Nowhere Man by Kamala Markandaya