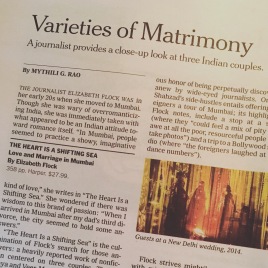 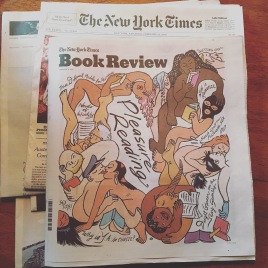 My review of The Heart is a Shifting Sea by Elizabeth Flock ran in this weekend’s New York Times Book Review– the Pleasure Reading issue. A snippet:

The journalist Elizabeth Flock was in her early 20s when she moved to Mumbai. Though she was wary of overromanticizing India, she was immediately taken with what appeared to be an Indian attitude toward romance itself. “In Mumbai, people seemed to practice a showy, imaginative kind of love,” she writes in “The Heart Is a Shifting Sea.” She wondered if there was wisdom to this brand of passion: “When I arrived in Mumbai after my dad’s third divorce, the city seemed to hold some answers.” 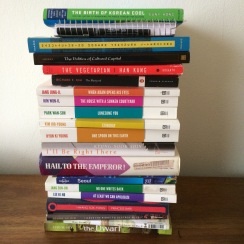 This story has been in the making for quite a while.

In 2011, I first got curious about Korean writing in translation; this past fall, thanks to a generous grant from the International Center for Journalists, I was able to follow the story to Seoul and spend two weeks talking to writers, translators, publishers, scholars, and book-lovers.

I’m so happy the resulting piece found a home on The New Yorker’s site.

I never met Chris Hondros.   But he took my photo once, on a very cold day two years ago when  I was part of a media gaggle outside Bernie Madoff’s Upper East Side apartment, waiting for the Ponzi-schemer to return home from a court appearance.

When I first saw that photo, the novelty of it tickled me. The camera had been turned on me — a media peon with a very minor role in the Madoff drama. It was slightly flattering and slightly funny, in part because it documented me holding my favorite travel mug, a souvenir from the Greenberry’s coffee franchise in Charlottesville. I never noticed Hondros specifically, and I’ll never know if he had been assigned to document the media scrum that day, or if this particular shot was just one he took while waiting for Madoff, bored like the rest of us.

Since hearing news of the deaths of Hondros and British photojournalist Tim Hetherington in Misrata yesterday that photo has taken on a completely new meaning — and I haven’t been able to stop thinking about it.   In light of Hondros’ death, the photo is a reminder to me that the world — and I don’t just mean the world of journalism, or its New York microcosm — really is quite small and interconnected.  And it reminds me that journalists everywhere, every day, can be made to pay a steep price for doing their jobs.

When Madoff’s car arrived that day, the crowd was caught off-guard.  CNN got the shot it wanted — mostly because of the good instincts of the photojournalist I was field producing for, who at the last minute stationed me as a lookout so I could signal which way the car was coming. In the chaos of the stakeout, I left my prized Greenberry’s mug on Madoff’s stoop, and the photo used to remind me of the mug I lost that day. But of course now the loss it conveys is much heavier.

(For more on Hondros and Hetherington, check out The Takeaway’s audio remembrance, either of these — one and two — New York Times slide-shows, or this video diary).

Mythili G. Rao is the senior producer for Today in Focus, The Guardian’s daily current affairs podcast. She previously was a producer for The New Yorker Radio Hour, a weekly program from WNYC Studios and The New Yorker magazine. Her book reviews, reporting, and essays have appeared in The New Yorker, The New York Times, The Daily Beast, Boston Review, the Los Angeles Review of Books, and others. She lives in London. Reach her by email at: mythiligrao@gmail.com